The 8 most beautiful towns in Biscay that you should visit

From Plentzia to Lekeitio, from Elorrio to Balmaseda, a visit to Bizkaia is a unique break that offers countless surprises. Medieval villas, fishing villages, postcard beaches … all this and more awaits you on your trip to the Basque Country. And if you’d like to visit all these places in a comfortable way, we suggeste we stay in our Líbere apartments in Bilbao. Dare to discover it with this selection of towns in Biscay.

Just half an hour from Bilbao, we find this picturesque coastal town, which stands out for its many charms and where getting lost is an absolute delight. From its bay, where the beaches of Gorliz and Plentzia converge to its medieval old town, it surprises you at every turn with corners of great beauty. The boats dotting the estuary here and there add to the unmistakable atmosphere of the fishing villages. To get a lovely panoramic view, it is worth going to the top of the Barrika cliffs. A postcard view awaits us, encompassing the estuary, the townhouses and the beach. The whole show is not to be miss.

Following the route to the east, in 45 minutes, you will reach Bermeo, one of the main fishing ports in the Basque region. The traditional architecture remaining in the port area is particularly striking. This rich architectural heritage demonstrates the importance of the town in past times. Founded in the 13th century, it was the capital of Bizkaia between 1476 and 1602. Among its many attractions are little gems such as the sunsets seen from Cape Matxitxaco or swimming in its coves, such as Aritzatxu. The cliff of San Juan de Gaztelugatxe is also very famous, a place that has even been used as a movie location. On our route, halfway before we reach Mundaka, we arrive at the Urdaibai Biosphere Reserve, an area of ​​fantastic scenic and natural value.

This small town has a sleepy air, with steep alleys and jewels such as the hermitage of Santa Catalina, majestically overlooking the sea. Fabulous views of the cliffs can be seen from different points of the town. One of the most spectacular viewpoints is Portuondo, from where you can enjoy contemplating the estuary of the Urdaibai Biosphere Reserve. In addition, Mundaka is a surfing destination par excellence, with magnificent waves appreciated by fans of this sport.

The next highlight on our map is Elantxobe, with its houses perched on the hillside. This is also a fishing village, although it is located between sea and mountains, resulting in a unique terrain and landscape. In the port area, you will find the main leisure area of ​​the town, while the upper part stands out for its viewpoints. Along with Mundaka and Bermeo, it is part of the UrdaibaiBiosphere Reserve. 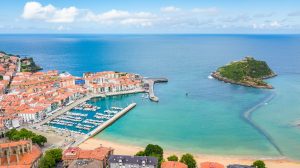 Bordering the coast, we arrive at the final coastal town on our list. Located in the Lea – Artibai region, it stands on the slopes of the Lumentxa and Otoio mountains and is considered one of the most beautiful towns in Bizkaia. Numerous old-fashioned buildings bear witness to its stately past, such as the Uribarri Palace, Abaroa, Oxangoiti or Uriarte, and of course, the Basilica of the Assumption of Santa María and its impressive Gothic altarpiece. The island of San Nicolás and the Santa Catalina Lighthouse are other points of interest for the visitor.

If we go inland, heading south, we arrive at the Ibaizabal valley and the town of Elorrio, framed by Mount Udalaitz and the Zumalegui river. It is a town with an architectural heritage of great value, which in 1964 was declared a Conjunto Monumental (Monumental Complex). Its medieval legacy is unique in Bizkaia, with many noble houses and palaces built in carved stone. In addition, the Arguiñeta Necropolis is worth a visit, where you can see funerary stelae dating from between the 7th and 9th centuries.

Located in the Enkarterri region, Balmaseda is the oldest town in Bizkaia. Among its most impressive characteristics is the medieval structure of its old town, of which a good deal is preserved. The Church of San Severino, that of San Juan Bautista, the Hermitage of San Roque or the Convent of Santa Clara are some examples of its vast architectural heritage. The Old Bridge, dating from the 15th century, is also very famous, one of the oldest remains of the town. As for its traditions, Holy Week is the most outstanding event, when its well-known Living Passion is organised.

Located next to the left bank of the Nervión river, Orduña treasures a historical heritage of great beauty. It was not for nothing that its old town was declared a monumental historic complex in 1997. On the other hand, its natural environment is another advantage that makes it one of the most visited destinations. Moreover, thanks to its rugged terrain, it is an ideal place for mountain biking. In short, a perfect enclave to combine nature plans and cultural tourism.