What to see in Vitoria and the local area

Vitoria offers an impressive mix of rich history and urban art. Its narrow cobbled streets start from the Historic Quarter, which, thanks to its curious shape, is better known as “the almond” and extend out to the city’s green surroundings. A route made up of medieval buildings, and contemporary settings, where to walk it is to take a journey back to the past.

Today, we open the doors to Vitoria’s most emblematic places. Spaces that welcome all kinds of tourists who want to discover the Green Capital of the Basque Country. Will you travel to Vitoria with us?

Our journey starts in Vitoria’s historic centre And for more than eight centuries, it’s here that the famous “almond” has been home to the oldest and most unique works of the city.

The Cathedral of Santa María is one of the town’s most visited buildings, appreciated by tourists and locals alike. Currently, the Vitoria Cathedral Foundation invites you to a live view of the work being carried out by archaeologists and restorers inside this 13th-century Gothic jewel. A unique opportunity to learn about the testimonies of the past from a different perspective.

But talking about the history of Vitoria is also talking about its old wall. This 11th-century medieval construction was the city’s defensive response to its delicate position high on a hill. Through a walkway system, this tour allows you to discover the Basque capital’s historical heritage through the well-preserved paintings and turrets found during the archaeological excavations of 2001. It will also link us to the following essential of this trip: the route of the murals.

While we’re talking about mixtures and contrasts, the Painted City is a perfect example of this: a journey that reveals the Old Quarter’s hidden corners with brushstrokes of colour captured in 16 murals. Different facades transformed into canvases on which local citizens and artists express themselves with legends, symbols and fantasy. Don’t forget that one of them, “The shortest night”, can be seen from the garden of the same wall, not to be missed!

Vitoria’s plazas: places for meeting and celebration steeped in history

Also known as the Plaza Vieja, the Plaza de la Virgen Blanca has been the heart of the city par excellence over the years. Dominated by the monument to the Battle of Vitoria, the square that formerly housed the main market is now home to numerous terrace bars and restaurants. It’s also the location of the “descent of Celedón”, a highlight of the town’s traditional fiestas. Alongside, the Church of San Miguel houses the chapel of the Virgen Blanca and patron saint of the city: a must. Also adjacent is the Plaza Nueva or Plaza de España. Constructed in the 18th century during the city’s urban development and spatial planning, it’s where you can find the Ayuntamiento de Vitoria today.

Vitoria’s Anillo Verde (Green Belt) results from the periphery’s transformation into a natural space of great ecological and scenic significance. Fully equipped for recreational use, this circular route offers visitors the opportunity of discovering the great diversity of natural environments on foot or by cycling. Our recommendation? A stop at the Salburua wetlands, part of the Natura 2000 Network, and environmental education activities carried out by the Ataria Interpretation Centre. 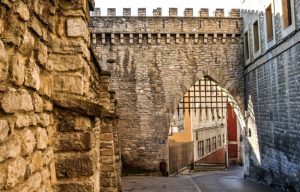 If you opted to travel to the city by car, don’t miss the chance of getting acquainted with these two touristic enclaves steeped in history. A visit to the Romanesque jewel which houses the medieval carving of the Virgin of Estíbaliz, and a tour of the terraces and channels of the salt flats, unique in the world.

But accommodation is one of the most important points when choosing a destination, and finding your best option will add the finishing touch to this trip. Líbere Vitoria aparthotels are located in the centre of town, just 10 minutes from the Plaza de la Virgen Blanca. Thanks to the layout and design, you have access to a personalised room with the freedom of feeling you’re in your own home! Our apartments in Vitoria are equipped with everything you need and are dog friendly, the ideal accommodation for your city break. Don’t miss out!