Getaway to Cordoba: Things to see and do in two days

Visiting Cordoba is one of those essential trips in life that we should not miss. This city, crossed by one of the jewels of Andalusia and Spain, the Guadalquivir River, was during the 11th century the most extensive and cultured capital of Europe. Today, the city of Cordoba maintains the historical and cultural legacy left in its streets by the Romans, Jews, Muslims, and Christians, such as the Mosque-Cathedral, the Alcazar of the Christian Kings or its historic center.

If you are somewhere in Andalusia such as Seville or Granada, do not miss the opportunity to get to know the so-called city of the three cultures. Cordoba capital, a place full of iconic buildings listed below, is a great place to visit in Cordoba and its surroundings in two days.

What to visit in Cordoba capital

Cordoba capital, a place full of iconic buildings and declared a World Heritage Site by UNESCO offers its visitors plenty of plans to do and things to see. Its streets, squares, unique monuments in the world, exquisite gastronomy and good atmosphere are some of the options you can enjoy during your getaway of two days or more. Below, we give you in more detail the name of some of the must-see places in Cordoba city that you must visit.

A work full of history, beauty. The Mosque of Cordoba is undoubtedly one of the most beautiful and impressive monuments in Spain and that makes it one of the must-see things to visit in the city. In this building of more than 20,000 m2 you can see and enjoy an unparalleled mix of styles and eras. Its columns and pillars inclined by the passage of time, a striking cathedral embedded inside the Mosque, its bell tower of more than 40 meters or the 365 symmetrical and bicolor arches are some of the treasures hidden in this World Heritage Site. 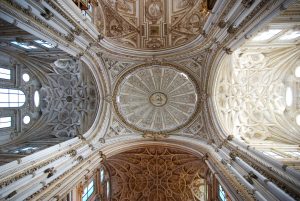 Located in the heart of the city, the remains of the Roman Temple of Cordoba were discovered in the mid-twentieth century during the expansion works of the city hall and in 2007 was declared by the Junta de Andalucía as a Site of Cultural Interest due to its great importance. Although many of its parts were reconstructed, other original elements such as columns or capitals can be seen in the museum of Anthropology of the city. The Roman temple is undoubtedly one of the many pieces of evidence of the importance and presence that the Roman Empire had in Cordoba. 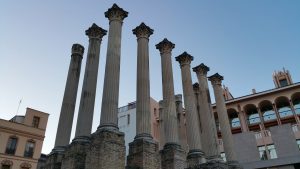 Alcazar of the Christian Kings

Although the Alcazar of the Christian Kings is one of the most representative buildings of Cordoba, it is relatively small and inside there are few things to see due to the austerity to which it was subjected after the passage of the Christians through it. What is remarkable about this building are its fabulous and well-kept gardens.  It is surprising the dimension of this space within the Alcazar. You can stroll among plants, trees, and numerous ponds. A highly recommended visit for couples, families, or groups of friends. 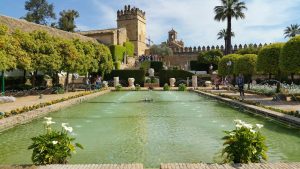 The Jewish Quarter of Cordoba

This neighborhood is called ‘La Judería’ because it was here where the Jews who came to the peninsula during the tenth and fifteenth centuries resided. Located in the northwest area of the Mosque of Cordoba, this is one of the most visited places in the city by tourists because it hides some must-see treasures such as the Synagogue, the Municipal Souk, or the Plaza Tiberiades. All the streets of this neighborhood are characterized by its white façade buildings and its famous interior courtyards of Cordoba. If you visit the Jewish Quarter of Cordoba do not forget to pass through the Calleja de las Flores, considered one of the most beautiful in the world. Its decoration and walls full of plants and flowers will not disappoint you. 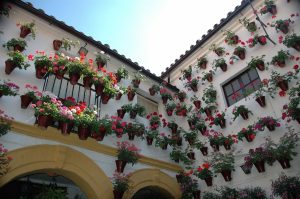 A few typical tapas of Cordoba

As we mentioned at the start of this article, this place offers endless plans to do. One of them is to take a gastronomic tour around the city.  If you are a lover of culture and gastronomy, pay attention to our recommendations of typical dishes of Cordoba that you should try or at least keep in mind for future trips.

Flamenquín is one of those typical Cordovan tapas that you will find in all the bars and taverns of the city. Unlike the traditional flamenquín, this one is characterized by being a roll where the meat is wrapped with Serrano ham and cheese, although sometimes they are also made with peppers or eggs filling.

Although nowadays salmorejo is a widespread and well-known dish throughout Andalusia, it is a dish originating in Cordoba. It is a cold cream made with breadcrumbs, tomato, garlic, salt and olive oil to which you can add shavings of ham, egg or croutons. Ideal for hot summer days.

A delicacy of Cordovan gastronomy and a very easy to make dish where the differentiating point is marked by the quality of the raw material. They are thin slices of eggplant that are fried and then add honey on top. If you are not a fan of honey, you don’t have to worry because they usually put it on the side. This dish is present in all the menus of restaurants and bars in the old town of Cordoba.

Who doesn’t fancy a plate of Iberian ham and cheese at any time of the year? Cordoba is famous among other things for the high quality of its sausages.  In all the bars of the city you will find these products and you can also do a tasting of cheeses and wines that will help you to know better the aromas, flavors and varieties of this province. 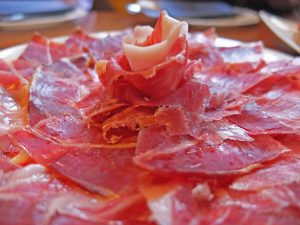