Day trips within an hour of Granada: The most beautiful villages

Granada is considered by many as the second most charming province of the autonomous community of Andalusia, as it should be. This city and its surroundings are home to stunning landscapes such as the Natural Park of Sierra Nevada, the valley of La Alpujarra and its small villages full of personality. If you intend to stay several days in Granada, we suggest you make your base of operations the Libere Granada Catedral apartments as its strategic location will allow you to reach in less than an hour all the villages we have selected for you and enjoy the plans that this wonderful province of Andalusia has to offer. Here is a list of the most beautiful villages of Granada that you should mark as essential visits during your stay in this city.

Which are the most beautiful villages in Granada?

Montefrio is a white village full of contrasts located northwest of Granada. Named Historic-Artistic Site since 1982, this magical place stands out for its location and for being in the top 10 of the villages with the best views in the world according to National Geographic magazine. The most characteristic of Montefrio is the crag where the Church of the Villa was erected by order of the Catholic Monarchs, built on the remains of the ancient Nasrid castle. Nor should we overlook the many viewpoints that allow visitors to enjoy spectacular views of this place full of history, such as the Mirador de las Peñas Francisco Adamuz or the Mirador de la Carretera de Tocon, which gives us one of the most famous views and shared on social media. 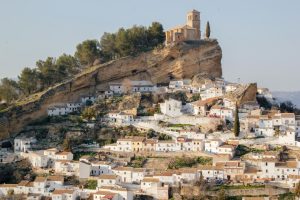 Bubión is another of the beautiful white villages that we can find in the province of Granada. Located at 1,300 meters above sea level, this village full of slopes and houses adapted to the orography of the place reflects very well the preserved architecture of the Berber period. In addition, along with the neighboring villages of Capileira and Pampaneira has been declared of Cultural Interest. If you like to visit places where responsible tourism is practiced, Bubión is a clear example of this thanks to the balance it maintains between the conservation of its natural and cultural heritage and tourism. You will be able to carry out an endless number of activities in this small village, from visits to the most typical places such as the Church of the Virgen del Rosario or the Museum Casa Alpujarreña, craft courses or hiking trails. 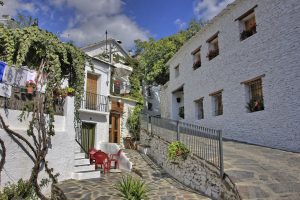 As we mentioned before, Capileira is an Asset of Cultural Interest and is part of the 3 jewels of the Alpujarra together with the villages of Bubión and Pampaneira, the whole village has been declared a Historic-Artistic Site. We could say that Capileira in addition to much beauty hides mystery as you never know where its many narrow streets full of endless staircases will take you. Walking through the village, enjoying its architecture and the immense natural space that surrounds it will make you love rural life and slow tourism. 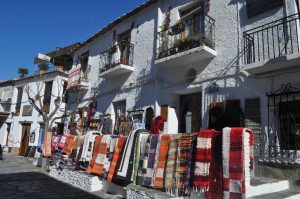 Another of the villages of the Alpujarra located between ravines and one of the most beautiful villages in Spain. Pampaneira is steeped in the Berber style that we can see in the staggered arrangement of the white houses that make it up or in its zigzagging narrow streets. It is a village that can be covered in one or two hours maximum as it does not exceed 18m2. With less than 300 inhabitants, the calm and peace that permeates this village allows the visitor to totally disconnect during the time of your visit. Regardless of the path you choose to start your tour of the village, you should know that they all lead to the same place: the Plaza de la Libertad, where you will find bars, restaurants and souvenir stores where you can get a nice souvenir. 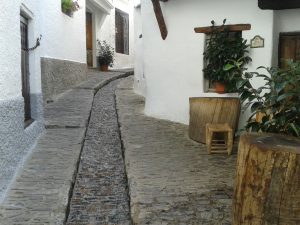 Surely you have heard about Lanjarón water. Well, as you can imagine, it is not only a brand name, but the name of the village where the bottling plant is located. The municipality of Lanjarón is part of the Sierra Nevada Natural Park and is the key to the Alpujarra. Besides standing out for its climate and its medicinal waters, this town is considered one of the places with the highest life expectancy in the world.  Our recommendation is that, if you have time, enjoy its natural springs as they have very beneficial therapeutic effects for health. 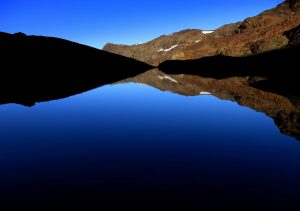 A place historically inhabited by Romans and Arabs due to the healing properties of its thermal waters. Today, they are still as well known and important throughout Andalusia. Alhama de Granada is a small town with a lot of charm and a fantastic architectural heritage.  Visiting the Arab Quarter, the silos and the dungeons, the Roman bridge or its spas are some of the cultural routes you can take. 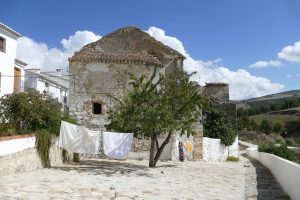 After having toured the beautiful inland villages of the province of Granada, we arrive at Salobreña, a magical and colorful place on the tropical coast of Granada. The blue of the sea, its white houses, the green of the crops and the brown color of its castle and rocky crag where this town began to develop give it an unparalleled beauty. Be sure to visit this coastal town just 45 minutes from Granada. 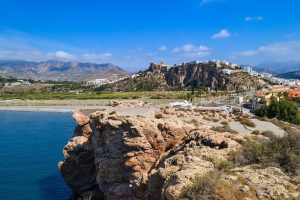