Day trips from Vitoria: discover the seven most beautiful towns in Rioja Alavesa

Setting out on the Rioja Alavesa Wine Route is a feast for all the senses. Its location between the Sierra de Cantabria, the Ebro river and Navarra makes it the perfect place for a getaway. Even though it is part of the Rioja wine area, Rioja Alavesa is one of the seven regions of the province of Álava (Basque Country), which are known locally as cuadrillas. The surroundings offer picture-postcard views, with vast vineyards, a backdrop of mountains and lovely old villages located here and there. Don’t miss anything: discover the keys to trip to remember with Líbere.

How to get to Rioja Alavesa from Vitoria

You can reach Rioja Alavesa in about 35 or 40 minutes by car from Vitoria, taking the A1, then continue on the AP68, and finally taking the N124. This is the best route, which brings you first to the Salinillas area and then onwards around the region.

Throughout the region, many towns are worth a visit, thanks to their history, architecture and beautiful landscapes. Traces of medieval times can still be seen in their streets, and you can also visit some impressive wine cellars. To the idyllic image of vineyards and picturesque villas, we must add many other attractions. The culture of wine, gastronomy and even the climate all contribute to creating a unique atmosphere. The proximity of the Sierra de Cantabria and the difference in altitude causes what is known as the ‘foehn effect’ from time to time. This meteorological phenomenon creates a kind of avalanche of clouds that advance from the mountains – a gift of nature that makes the view of the horizon even more impressive.

If you don’t want to miss anything, take note of the most beautiful towns and their main attractions to make the most of your trip.

A small town surrounded by a wall, where you can also admire the Palace of the Counts of Oñate and the Torre de Los Sarmientos.

As well as architectural jewels such as the Arco Larrazuria and the Palacio Paternina, wine tourism is one of the town’s main assets. Touring its wineries is to take a journey from tradition to modernity. In the Tierra and González Teso wineries, you can still see some old buildings dating from the 14th century. In Mitarte, part of the thirteenth-century structure still remains, while in Viñedos Labastida -Solagüen, the latest contemporary architecture prevails.

It has a small-town charm while hiding treasures such as the Baroque church of Nuestra Señora de la Asunción. In addition, the town has several wineries to choose from, from the tradition of Amaren to the innovative spirit of Ostatu or Baigorri, with a modern building designed by the architect Iñaki Aspiazu.

This town lies between the River Ebro and the Sierra de Toloño. La Ermita de San Juan de Ortega, the Palacio de los Sodupe or the Iglesia de la Inmaculada are some of the most outstanding monuments. Bodegas Guzmán Aldazábal organises agrotourism activities, from a visit to their facilities to a wine tasting amongst the vineyards, a perfect plan for groups.

Numerous wineries coexist here and compete in terms of the quality of their wines. Pago de Larrea, Viña Salceda, Marques del Riscal or Valdelana are attractive options for delving into viniculture. The latter has one of the most striking facilities in the area and has won Best Winery in Art and Culture three times. Among its monuments, a visit to San Andrés Church and the Hermitage of the Virgen de la Plaza is recommended.

Laguardia is the capital of the region and one of the most beautiful enclaves in the area. It preserves the flavour of a medieval town, which among many other unique features, have led it to be recognised as one of the most beautiful towns in Spain. The walled centre, with its old entrance gates, cobbled streets, palaces and manor houses, are just some of its attractions. Santa María de los Reyes and San Juan Bautista are the two main churches. Among the ornamented houses, the most prominent is the Casa de la Primicia, dating back to the 14th century. While you’re in the area, don’t forget to see the dolmens of La Hechicera and San Martín, witnesses of prehistoric times. In addition, the bodegas are part of the history of this town, since beneath the old town are numerous cave cellars, some of which are open to visitors. As for the current bodegas, there are countless fascinating examples. Among them, curiosities such as El Fabulista, lying beneath the birthplace of the famous fable writer from the town. Among the most noteworthy, Casa Primicia or Ysios, surprising for spectacular architecture, should not be missed.

This Alava village offers the traveller living traces of the old rural life and a fabulous landscape setting. You can visit one of its trujales, an ancient oil mill, because in earlier times, olives were cultivated as well as vines. Other examples of the daily life of past times are the fountain, laundry and water trough, preserved in what is known as Huerto del Fraile. As for the bodegas, El Mozo Wines and De Luis R. are your best bets in the world of wine. 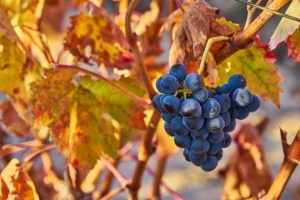 Where to eat in Rioja Alavesa

Gastronomy is one of the area’s greatest attractions, with delicious meat and fish washed down with local wines. At the last stop on the route, Bodega Luis R. also offers a restaurant, an excellent idea for combining a meal and wine tasting. In Labastida, the Jatorrena and Petralanda restaurants are highly recommended, both specialising in traditional Basque cuisine. In the cuadrilla’s capital, there are many more possibilities, among which the Batzoki Restaurant, the Hospedería Los Parajes, Villa Lucía or El Capricho de Baco are the most notable.

From your aparthotel in Vitoria city centre, it’s easy to get around to visit the bodegas of Rioja Alavesa. You have parking at your disposal so that you’ll save time when going out in your car to enjoy this enchanting tour.