Have you ever heard of the Salto del Nervión? Would you like to spend a fantastic day in the company of your family or friends in a magical natural environment near Vitoria? We tell you everything you need to know to make the most of one of the most spectacular natural sites in the Basque Country: Salto del Nervión waterfall.

As we mentioned before, the Salto del río Nervión is one of the most incredible natural sites in the Basque Country. It is the highest free-leaping waterfall in the Iberian Peninsula and the second highest in Europe, with a fall of more than 220 meters. Impressive, isn’t it?

A true wonder of nature near Vitoria that gives us breathtaking images. Today we can enjoy this landscape thanks to the action of the passage of time and erosion on the limestone of the canyon, which gives it its characteristic appearance.

The water coming from the Urita, Iturrigutxi and Ajiturri streams converge to form this waterfall, which is the source of the Nervión River. It should be noted that the peculiarities of the terrain, with porous stones, make it not possible to enjoy all year round the image of seeing the water falling forcefully down the waterfall, since in the driest times the water seeps through subway pathways between the rocks. But this makes the spectacle of the waterfall even more exciting when it can be seen in all its splendor. In addition, if you are a nature lover and you like birds, you can enjoy their flight and contemplation between the walls of the Delika canyon.

Salto del Nervión waterfall from Vitoria: How to get there?

It is possible to reach the Salto del Nervión by car. It will take you just over an hour from Vitoria. At the exit of the city, you must follow the N-102 for about 5 minutes until you join the A-2622 towards Nanclares de la Oca. After approximately 10 kilometers you will have to take the detour to the A-3314 to Zuarzo de Cuartango, and from here continue the A-3316 to Salto del río Nervión. 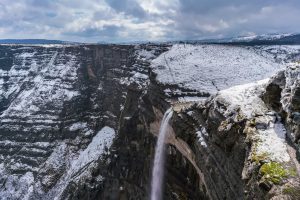 Where to park to see the Salto del Nervión waterfall?

There are three parking lots in the vicinity of the waterfall with different distances to the Salto del Nervión viewpoint. Keep in mind that these parking lots have limited capacity, so we advise you to arrive early if your idea is to visit this place during the weekend as the number of visitors is usually high. Once there, you will have to decide which route you want to take, long, intermediate, or short. Here are our parking suggestions depending on the route you want to take.

What is the best season to visit the Salto del Nervión waterfall?

Spring is one of the best times, because the thaw coincides with the rainiest months. However, also after a storm or after several days of rain you can find the surprise of water falling among the rocks. Nowadays and thanks to the constant updating of social networks, it is easy to find the right time to ensure the delight of the spectacle of the Salto del Nervión in all its glory.

Depending on our ability as hikers and the time we want to spend, there are three possible routes to choose from. In all three cases they start from the parking lot called Fuente Santiago that we mentioned in the previous section. This parking lot is located next to the Monte Santiago Park house, an interpretation center that offers guidance and information to visitors. Below, we briefly explain each of the routes.

Route 1. Fuente Santiago – Mirador Rubén: it is a simple route, suitable for families, and takes us through a beech forest to one of the viewpoints in the area. The estimated duration is 15 minutes.

Route 2. Fuente Santiago – Mirador for Salto del Nervión: the route is also very simple, although a little longer, around 20 to 25 minutes. On our way we will be able to see the ancient wolfholes, an ingenious system invented by shepherds to scare off and trap wolves.

Route 3. Circular route that starts at Fuente Santiago to visit the two viewpoints mentioned in the two previous routes. The approximate time of the walk is an hour and a half, and it is recommended for hikers with some experience.

What to see near the Salto del Nervión waterfall?

Nearby there are many other options to continue enjoying nature. One of them is to follow the Senda Verde de Delika, an easy and beautiful route for the whole family. If we go a little further, about 45 minutes away is the Cascada de Gujuli, a smaller waterfall than that of the Nervión, but also in a very striking place. Other recommended plans are to visit the nearby town of Orduña and its historic center, or to visit a txakolí winery, a typical Basque wine.

Time for rest: Where to sleep

The Líbere Vitoria aparthotel is a perfect option to get to know the best corners of the province of Alava. A comfortable, versatile, and modern solution where you will breathe freedom, feeling that you inhabit your own space. It has private parking, so it will be very easy to move around during the day without worrying about where to park when you return. A wonderful option to combine urban plans with rural tourism, enjoying the best of each place.