Getting to know Vitoria requires a leisurely journey to discover all its hidden secrets and the wonders that surprise you at every step. And of course, it is advisable you stay in the city in such a confortable accommodation as the Líbere aparthotels in Vitoria. We tell you everything you need to know so that you don’t miss anything on your trip to the capital of Alava.

Vitoria’s Casco Viejo (Old Quarter) bears faithful witness to the city’s past as a medieval town perched on a hill. It is believed to have been founded by Sancho VI, a Navarrese king who conquered the old village of Gasteiz and gave it the name of Nueva Victoria. Its street layout makes us feel we are in another era as we stroll through them. Many of their names reflect the artisan trades of those who inhabited them, such as Herrería, Cuchillería or Zapatería. In other areas, the vivid memory of the old fabric markets is retained, such as in Calle Chiquita, where the mural “In the thread of time” shows a metaphor of that history. Thus, modernity combines with the memory of Vitoria in days gone by, giving us an enjoyable walk through time.

On a tour of the old part of the city, you cannot miss a visit to the cathedral of Vitoria, full of incredible architectural treasures. It is also known as the old cathedral, a church whose first foundations began to be laid around the year 1200, although its construction lasted for several centuries. The result is a Latin cross church with three naves and several chapels inside. The tower is constructed on an octagonal plan, with a bell tower erected between the 16th and 17th centuries. The portico and the impressive ribbed vaults have great artistic value: a true delight for lovers of sacred art. 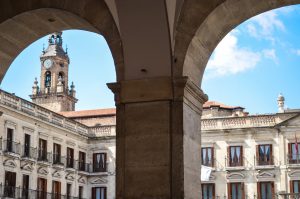 Murals in the Old Town

Urban art has its own voice in Vitoria’s old town, playing with the environment to tell stories of yesterday and today. They tell us about those who inhabited this place in past centuries, about legends, ancient traditions and also about contemporary concerns, such as caring for the environment. Among Vitoria’s murals, there is no lack of homage to the elderly, neighbourhood life, and social causes such as volunteering. Among the most emblematic, the Eskuz-Esku trilogy stands out, which can be seen between 86 Calle Herrería and 79 Calle Zapatería. However, the common thread is the hands, which give life to art, work and music. The bold artistic style and variety of subject matter create quite a spectacle. Sixteen artworks in total make up the route of the murals.

Other attractions of Vitoria’s medieval town

Walls of Vitoria. This is one of the medieval remains attesting to the ancient splendour of this town. Three sections of the original wall dating from the 11th century are preserved, although there have been two other walls in the history of the city.

Churches in the Old Town. In addition to the cathedral, there are three churches whose towers outline the most famous profile of the city: San Vicente, San Miguel Arcángel and San Pedro.

Palaces and large houses in the Old Town. The Renaissance is highly visible in Vitoria, with beautiful palaces such as Montehermoso, Villa Suso, Bendaña, Álava-Esquivel, the Casa del Cordón or the Torre de Doña Ochanda. This last building also houses the Museum of Natural Sciences, a highly recommended visit.

Bibat Museum. Located on Calle Cuchillería, 54, it houses two museums in the same institution: the Archaeology of Álava and the Fournier de Naipes. Together with the Bendaña Palace, now restored, a new building has been constructed that integrates a first-rate museum complex.

Among the numerous options for enjoying pintxos in the Casco Viejo area, Calle Cuchillería is essential. For the clueless, keep in mind that it is common for the street’s name to appear in both Spanish and Basque, which in this case is Aiztogile Kalea, a classic tapas area. Some of the most prominent are the Idoia bar, El Siete, the Txolarre Tavern or the Bistro Bar El Gautxo. Other appealing options in the Old Town are the bars on Calle Pintorería, Fray Zacarías Martínez, Cuesta de San Francisco or Plaza de la Virgen Blanca. A whole experience to enjoy delicious pintxos or potes, as they are also known in the Basque region.

What to see in the surroundings of the Old Town

Among the most iconic places in the city are the Plaza Nueva and the Plaza de la Virgen Blanca, famous for the plant sculpture known as Vitoria Gasteiz. Another of the most visited points is the Basque Parliament, located in the former institute Ramiro de Maeztu. The Parque de la Florida and its monument to Eduardo Dato, Calle Postas and Calle del Prado Street are other places near the Casco Viejo that are well worth visiting on our walks through Vitoria.